As the two official languages of Canada are English and French, I knew virtually no Spanish before coming to Paraguay. In any situation, language barriers are a challenging obstacle. I realized very quickly that I had a lot to learn and that becoming a fluent Spanish speaker would be a long process. The thing about learning a second language, is it requires effort on both ends, the speaker and the listener. It took only a few days for me to see that the effort would have to come 90% from me, and 10% from the people around me. To this day I have many problems with people telling me "I can not understand you", no matter how many times I repeat myself or try to rephrase my sentence. It seemed that the only person looking to help me was my Paraguayan brother, who speaks English and Spanish. The more I converse with my brother, the more I notice that we speak our own dialect... Spanglish. We switch languages mid sentence and answer questions in English, then Spanish. Often times, I will say something and not be entirely sure which language is coming out of my mouth. It sounds bizarre, but this has helped to improve my Spanish as well as my brother's English. This is not to say that I have stopped trying to learn and perfect my Spanish, but I am proud to say that I am a fluent Spanglish speaker. 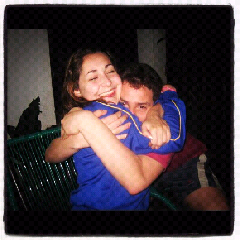 Posted by .simplyreality at 1:23 PM